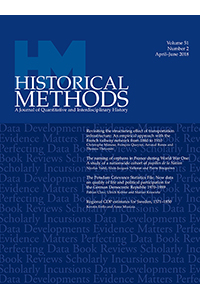 The Evolution of Population Distribution on the Iberian Peninsula

The Evolution of Population Distribution on the Iberian Peninsula: A Transnational Approach (1877–2001)

Surpassing the national perspective usually adopted, the authors confirmed the existence of a pattern of population distribution common to the whole Iberian Peninsula in the long run. This pattern is clearly associated with geographical factors. These variables seem to have more weight in explaining changes between 1877/78 and 1940 than in the period from 1940 to 2001. The observation of the cross-border region has shown that proximity to the frontier has not generated any distinct pattern of population density on either side of the boundary line. The spatial coherence of the observed phenomena throughout the Peninsula and of its evolution, independent of the border between states, reinforces the importance of geographic factors in their explanation. At the same time, this verification opens up new issues related to the effect of national political and economic policies.