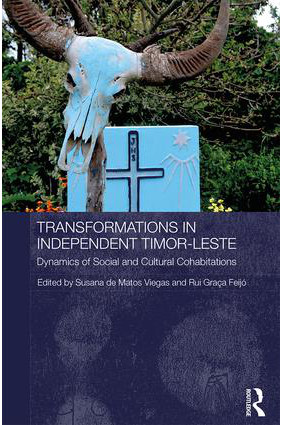 At home we wear cawat, outside we wear a tie

At home we wear cawat, outside we wear a tie: cohabitation and political legitimacy in grass-roots democracy

Sobre o livro:
1999 was a decisive year in the long history of the people of Timor-Leste, whose future was open when they voted for independence in a UN-sponsored referendum. Its results left no doubt that the Timorese considered themselves to be a nation wishing to have their own state, which they would rule.
This book examines a vast array of transformations that have taken place over the past decades. It puts forward the idea of “cohabitations”, which aims at inscribing the mutual influences arising from the existence of distinct social processes not only side by side but in their mutual influences and entanglements, sometimes resulting from effective clashes, some others from peaceful manipulation of social and cultural differences. From this analytical viewpoint of evolving power dynamics of cohabitations, experts in the field investigate issues that have been contentious in the recent past and analyse the challenges that present-day Timor-Leste is facing. Structured in three parts, the contributions address issues of governance, land, as well as the transformation in the traditional culture including conceptions about identity and exchange, and transformations in the ritual and religious experiences of becoming a nation rooted in self-determination.
For the first time bringing together original contributions by the most notable experts on Timor-Leste in a cohesive and comprehensive way, the book will be of interest to academics in the field of Southeast Asian Studies, Anthropology, Sociology, Law Studies, History and Political Science.