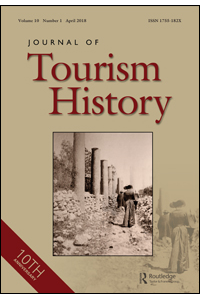 Sea bathing and seaside tourism in Portugal in the nineteenth and twentieth centuries: an overview

The acknowledged importance of seaside tourism in the economy of Portugal and in the construction of the country’s international and domestic image has strangely not resulted in broad narratives concerning the history of this phenomenon. The Portuguese seafaring tradition, repeatedly commemorated by public authorities, seems to have eclipsed the importance of a subject that scholars have already studied in other national contexts. This article aims to fill this gap, surveying existing work on the history of sea bathing and seaside tourism in Portugal from the eighteenth century to the 1960s. The focus is on the economic, political and social implications of the evolution of seaside resorts, and the paper addresses topics such as health concerns, transportation, legislation, state intervention and private investments. Considering the Portuguese case in comparison with the evolution of the phenomenon in other countries, this article provides analysis of an array of sources, some of which have not yet been examined by historians in Portugal. Questions intended to promote future research are raised throughout the study, showing that this is a largely unexplored subject in Portuguese and international historiography. Additional research will be invaluable.