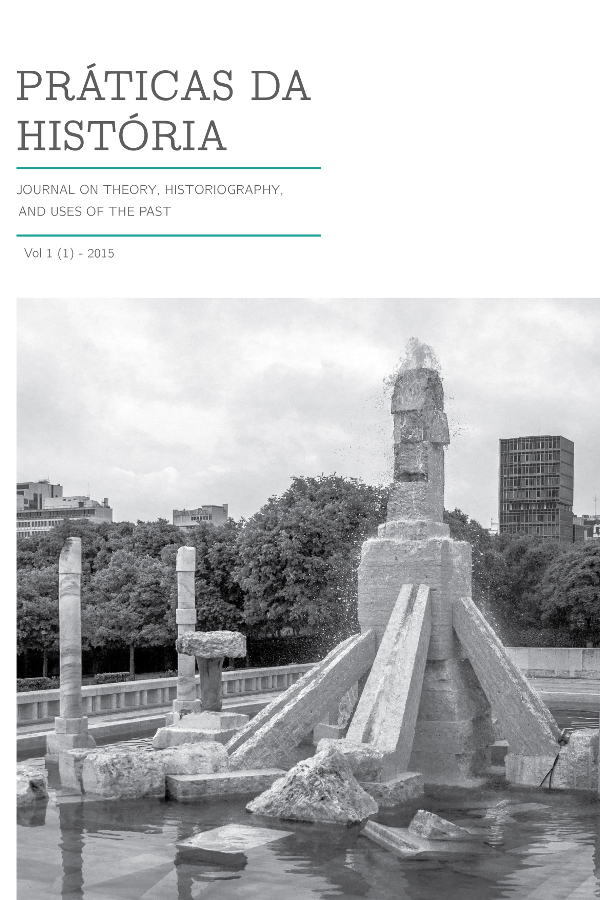 Editorial note:
This is the first issue of the journal Práticas da História. The creation of this publication arose from a proposal by António da Silva Rêgo and Joaquim Gafeira, whose motives are explained in the brief declaration of intent that follows this editorial note. After this initial proposal, a group of researchers in history with various institutional affiliations was assembled, and the project took the configuration which it now has. The fields of publication are immediately suggested by the subtitle Journal on Theory, Historiography and Uses of the Past and its objectives are broadly defined in the mission statement so that we can dispense with the opening remarks that usually preface “first times”.
The article section in this first issue opens with the publication of a text on one of the keywords in the debate about historiography over the last four decades: “meta-history”, a concept created by Hayden White and here discussed by Herman Paul. Next, Ansgar Schaefer discusses the relation between visual and verbal representations of the past, analyzing the TV documentary series A Guerra [The War], produced by the journalist Joaquim Furtado, which shows the colonial wars that led the African countries under Portuguese imperial rule to independence. The image is also the focus of a third article, by Mariana Pinto dos Santos, which discusses and analyses the work and legacy of José-Augusto França in art history writing, contributing to a critical history of historiography in Portugal. Then, Mikko Toivanen analyses the latest developments in Comparative History and Global History, using the state of the art on the History of China as its object. Closing this section – and matching our intent that the journal’s self-reflexive purpose would open up a space for the history of humanities and social sciences – there is an article where Bernardo Pinto da Cruz and Diogo Ramada Curto examine the figure of the “detribalized”, an analysis especially sensitive to the juridical and sociological codifications and conceptualization of this category in the recent history of the Portuguese empire.
After the article section, there are five other texts. The first is an essay in which Tiago Baptista debates the documentary Linha Vermelha [Red Line] by José Filipe Costa and the sculpture Monumento ao 25 de Abril [Monument to the 25th of April] by José Cutileiro and seeks to answer the question: how to represent a revolution? Next, there is an interview with Jacques Rancière by Maria Benedita-Basto and José Neves on the occasion of the Portuguese edition of The Names of History. Before the final section, Miriam Halpern Pereira writes a testimony in which she reflects on the exchanges of knowledge between academia and society in a dialogue with her own academic path. In the review section, Sérgio Campos Matos writes on Historiadores en España. Historia de la historia y memoria de la profesión by Ignacio Peiró Martín and Marta Faustino writes on Nietzsche’s Philosophy of History by Anthony K. Jensen.
Finally, we should thank the indispensable support provided by the Centro de História d’Aquém e d’Além-Mar, a research unit affiliated to the Faculty of Social Sciences and Humanities of the New University of Lisbon and the University of Açores, as well as by the Instituto de História Contemporânea, a research unit affiliated to the Faculty of Social Sciences and Humanities of the New University of Lisbon and the University of Évora.