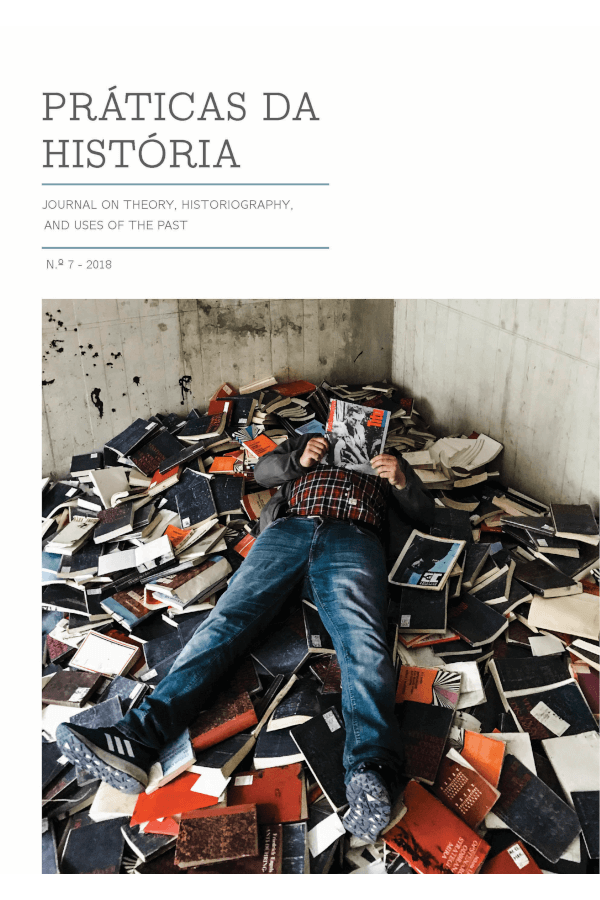 Editorial note:
This is the seventh issue of Práticas da História – Journal on Theory, Historiography and Uses of the Past. Since our first issue that we have been focused on analysing and discussing diverse ways of being aware of and making sense of history. Reflecting this diversity, the current issue brings together studies on historiographical trends playing an important role in university circles in the field of History (as is the case of the Begriffsgeschichte), as well as on the products resulting from the most recent technological and commercial developments, as is the case of digital historical games, in which regard this issue contains the article “World, Structure and Play: A Framework for Games as Historical Research Outputs, Tools, and Processes”, by historian Robert Houghton. As for Begriffsgeschichte (Conceptual History), this is the subject of our forum, in which historians Fátima Sá e Melo Ferreira and Sérgio Campos Matos, both of whom are part of the Iberconceptos project, propose a combined reading of two seminal texts: “Categories, Classes and Identities in Time. Escaping Chronocentric Modernity”, by historian Javier Fernández Sebastián, and “Categorias. Uma reflexão sobre a prática de classificar (Revisto)”, by historian António M. Hespanha. This issue also includes an article that seeks to examine, from a new critical perspective, a method-ological question that has long been a subject of discussion among historians: in “Historiadores citando historiadores: afirmações de verdades e a construção do discurso histórico (Diogo Borel e as traduções da Constituição francesa)”, Cláudio DeNipoti discusses the practice of successive citations by historiography and, through a case study, describes how this practice validated a rumor that, through its repetition, originated a new historical event.2018 marks the bicentenary of the birth of Karl Marx, who died in 1883, in London, having been born in Trier, in 1818. It is thus no coincidence that most of the pages of this issue contain a set of articles and essays that, directly or indirectly, underscore the role that Marx’s work and the Marxist tradition have played in historiographical production and discussions from the late 19th century onward. There is no doubt that, as the curtain fell on the 20th century, historiography seriously questioned the intellectual and scientific credibility of Marxism. An effect of this questioning was, for example, the relegation of an author who had wielded significant influence during the second half of the 20th century, Louis Althusser, to whom philosopher Irene Viparelli dedicates the essay “A importância teórica dos Écrits sur l’histoirede L. Althusser”. Other Marxist writers did not, however, see their relevance wane after the fall of the Berlin Wall. It was in the 1990s that the work of Eric Hobsbawm – about which historian George Souvlis has written the article “The Popular Front and Marxism in Eric Hobsbawm’s Historical Works” – achieved its greatest editorial success. The continued importance of Marxism in historiography is also revealed in the article by historian Sanjay Seth, who analyses the contributions of Post-colonialism for Nationalism Studies. In “Pós-colonialismo e a História do Nacionalismo Anticolonial”, Seth focus on Subaltern Studies, a historiographical tradition that, in recent decades, has achieved widespread international prominence in Anglo-Saxon academic circles and beyond, and places them in the context of their close initial relationship with Marxism. Even the works of Marx and Engels continued to be republished after the fall of the USSR and – inevitably – were examined in a new light. While maintaining their place in the canon of the History of Political Thought, texts such as the Communist Party Manifesto are nowadays re-appropriated by theoretical currents that are relatively independent of the Marxist tradition, as can be seen in the article in this regard by philosopher José Miranda Justo (“Heterogeneidades – uma perspectiva invulgar da filosofia da história a partir do Manifesto Comunista”), calling into debate authors such as Gilles Deleuze and Félix Guattari. Last but not least, apart from the usual section of reviews, this issue also has an interview with historian Enzo Traverso. In his work on 20th century history and what – citing Georges Perec – he called the mode d’emploi of the past, Traverso has maintained a close relationship with Marxism, which is simultaneously one of the subjects of his studies and a theoretical and conceptual instrument for his research. .