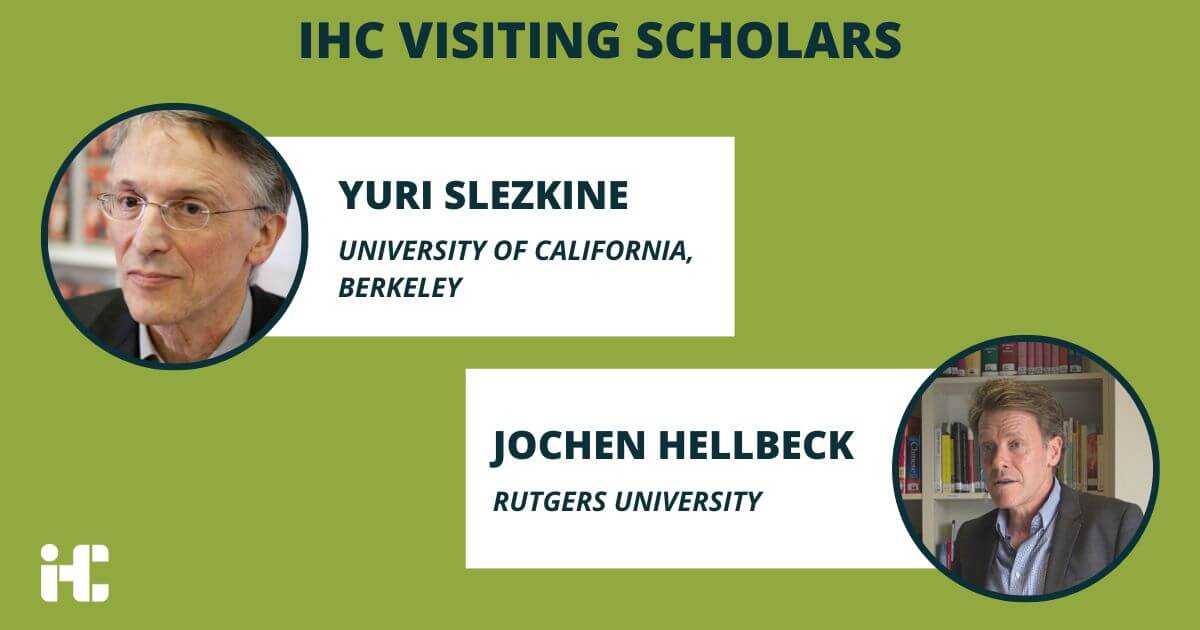 Yuri Slezkine was born and raised in Moscow, USSR, and worked as a Portuguese interpreter in Mozambique and English instructor in Portugal before moving to Austin, Texas, to study Russian history. For almost 30 years, he has taught at the University of California, Berkeley. Slezkine’s books include Arctic Mirrors: Russia and the Small Peoples of the North (Cornell University Press, 1994) and In the Shadow of Revolution: Life Stories of Russian Women from 1917 to the Second World War, co-edited with Sheila Fitzpatrick (Princeton University Press, 2000). His 2004 book, The Jewish Century, published by Princeton University Press, has been translated into ten languages. His most recent book, The House of Government: A Saga of the Russian Revolution (Princeton University Press, 2017), was named among the best books of 2017 by the New York Times, Spectator, Guardian, Economist, London Review of Books, and Le Monde, among others.

Jochen Hellbeck is Associate Professor of History at Rutgers University. A Russian specialist by background, he is particularly interested in autobiographical accounts and people’s self-understandings in historical perspective. His book Revolution on My Mind (Harvard University Press, 2009) explores personal diaries written in the Soviet Union under Stalin, and addresses the paradox of self-expression in an overtly repressive political system. More recently, he has explored in comparative and transnational ways how the Soviet, German, and British states mobilized their citizens to fight during World War II. Stalingrad: The City that Defeated the Third Reich (2015), first published in German, is the first Western study to probe the meaning of the Battle of Stalingrad for the Soviet soldiers and civilians who defended the city in this pivotal moment of World War II.

Below is a summary of the programme of activities of both researchers during their stay in Lisbon:

The domain or influence of the Russian State over the territories that border it has been a subject of intense geopolitical reflection currently. In this session, we look more closely at the historical processes in the course of the 20th century in the USSR, which have established continuities or allowed changes in Russian history. An analysis of the development of Soviet politics, from the October Revolution to the fall of the Berlin Wall, passing through the Soviet opposition to Nazi Germany and the relationship with the United States of America.

This half-day workshop is an opportunity to know the historiographical, literary and ethical challenges that the history of the USSR has posed to two of its most renowned specialists. The workshop will allow us to discuss the way in which personal trajectories and the very notion of self were related to the historical-social transformations in the Stalinist period. At the same time, the workshop will focus on methodological issues arising from the analysis of sources such as diaries, memoirs or belles-lettres.

28 November, 14h, ICS — University of Lisbon
The Politics of (Inter)nationalism: The USSR and the History of the 20th Century
With Yuri Slezkine

The first part of this seminar will deal with the policy of nationalities elaborated by Soviet communists in the framework of Soviet state-building. For this purpose, a landmark text from historical studies on the USSR will be discussed. In 1994, Yuri Slezkine published the article “The USSR as a Communal Apartment, or How a Socialist State Promoted Ethnic Particularism”. Just a few years after the end of the USSR itself, this article materially altered the way we understand the history of relations between the centre and peripheries of Soviet power. Almost thirty years later, Slezkine will be with us to discuss his then contribution. Seminar participants should read the text in advance, which is available here. The discussion will be launched by a brief presentation by historian and political scientist António Costa Pinto.

The second part of the seminar will focus on the internationalist policy developed by the USSR in the African context, particularly in the framework of the second half of the 20th century and in the context of the so-called global Cold War. The documentary Our Africa, released in 2018 by Alexander Markov, documentary film-maker and PhD student in Anthropology at ICS-UL, will be screened. Following the screening of the documentary, a conversation will take place with Markov, Slezkine (who worked as a Portuguese interpreter in Mozambique in the late 1970s) and historian Catarina Laranjeiro.

Literary canons have been recently submitted to criticism in different Western countries. This tendency can be understood as an attempt to open up space for literary works that have long been ignored. At the same time this process may be related to the so-called decline of Western civilization. Yuri Slezkine will be joined by historians Diogo Ramada Curto and Luís Trindade and by literary scholar Manuela Ribeiro Sanches.