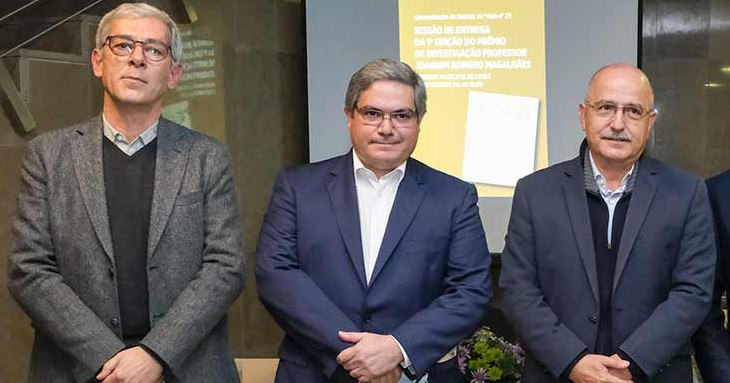 João Romero Chagas Aleixo was the winner of the first edition of the Professor Doutor Joaquim Romero Magalhães Prize with the paper “A migração de Andaluzes para a vila de Loulé, entre 1850 e 1914” [The migration of Andalusians to the village of Loulé, between 1850 and 1914], where the IHC researcher explores the origins of Andalusian immigrants in Loulé , their motivations and their role in the development of commerce, industry, and services in the village.

The biennial prize, created by the Municipality of Loulé through the Al-‘Ulyà journal and with a monetary value of 4000 euros, aims to “encourage and reward new research studies on the invaluable historical and cultural heritage of the municipality of Loulé” and pay tribute to the Loulé historian for whom it is named.

The award ceremony took place last Saturday, 20 November, at the Loulé Municipal Archive. Two Honorable Mentions were also awarded to Marco de Sousa Santos (for the article “A história do lobo no termo de Loulé (séculos XVI a XIX)” [The history of the wolf in Loulé (16th to 19th centuries)]; and to Nuno Manuel dos Santos Loureiro, author of “Carta agrícola e florestas do Concelho de Loulé no início do século XX – Memória explicativa e descritiva” [Agriculture and Forest Chart of the Municipality of Loulé in the Early 20th Century – Explanatory and Descriptive Report].