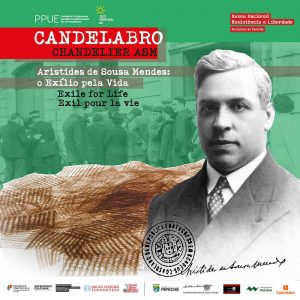 On the 27th of April, the exhibition Candelabro ASM — Aristides de Sousa Mendes: o Exílio pela Vida [Chandelier ASM — Aristides de Sousa Mendes: Exile for Life], exhibited in Bordeaux in 2020, opens in Peniche. Integrating the celebrations of the 25th of April and the Portuguese Presidency of the Council of the European Union, this will be the first international exhibition of the National Museum of Resistance and Freedom.

The exhibition in honour of Aristides de Sousa Mendes is curated by IHC historian  Cláudia Ninhos, together with Marie-Christine Volovitch-Tavarès and Victor Pereira. It arrives in Portugal through a partnership between the Directorate-General for Cultural Heritage (DGPC), the Sousa Mendes Foundation, in New York, and the Sousa Mendes Committee, in Bordeaux.

The “Chandelier” refers to the video-sculpture featured in the exhibition. Created by Werner Klotz, an artist residing in Berlin, the large contemporary work “interprets the dilemma of Aristides de Sousa Mendes in the days before the decision that would save thousands of lives from Nazi terror”, reads the DGPC statement.

The DGPC also states that the Portuguese consul “continues to be a symbol of courage, selflessness, and love for Humanity, values ​​that must be exalted and echoed, in a world still decimated by attacks on Human Rights, oppressive regimes, and countless armed conflicts that lead to flight of populations and scenarios of misery, suffering, and death ”.

The opening to the public on the 27th of April is related to the commemoration of the release date, in 1974, of the political prisoners of the old prison in the Peniche Fortress. The exhibition can be visited from Wednesday to Friday, from 14PM to 18PM; on Saturday and Sunday, from 10AM to 1PM. It will be open until October 2021 with free entry.