The exhibition Portugal e Luxemburgo – Países de Esperança em Tempos Difíceis [Portugal and Luxembourg – Countries of Hope in Difficult Times], curated by Margarida de Magalhães Ramalho and Claude Marx, and created in 2020 for the Centre Culturel de Rencontre Abbaye de Neumünster in Luxembourg, opens tomorrow, 13 May, in the Palace of the Citadel of Cascais. 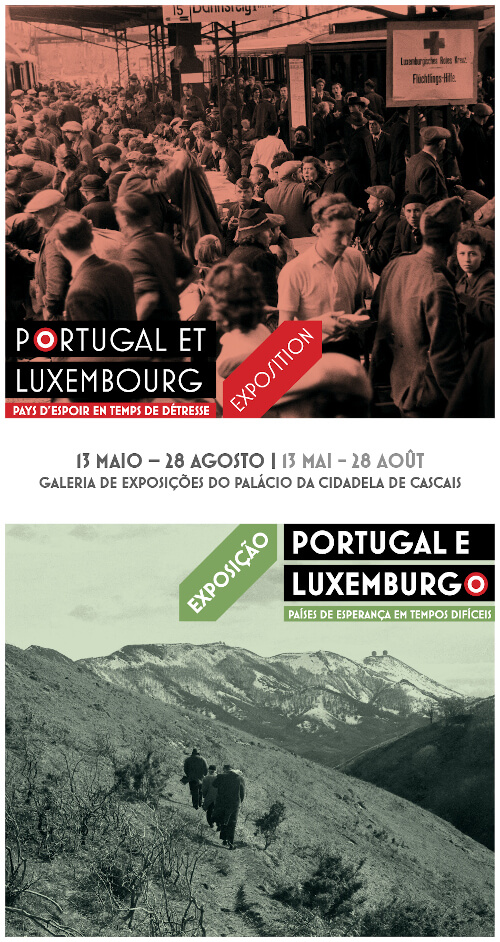 Focused on the role of Portugal during World War II as a haven for Luxembourgish refugees and on how Luxembourg, decades later, became the destination of many Portuguese fleeing dictatorship and/or poverty, the choice of the town of Cascais was linked to the fact that it was in the Casa de Santa Maria, opposite the Citadel Palace, that, at the beginning of her exile in 1940, Grand Duchess Charlotte and her family lived for a few months.

The exhibition is divided into several topics related to the global conflict, ranging from the reasons for the rise of Nazism and the outbreak of war in Europe to the fate of those who fled. It also shows the difficulties encountered by refugees on their escape route and the role of Aristides de Sousa Mendes in rescuing thousands of people. It also addresses Portugal’s policy of neutrality and the passage of thousands of refugees through the Portuguese territory, including the stay of the Grand Ducal family in Cascais. Finally, it focuses on the evolution of Luxembourg in the post-war European context and the Portuguese repressive dictatorship, which dictated the country’s economic backwardness and forced many to leave.

In Cascais, the exhibition was also enriched with contemporary content linked to Luso-Luxembourgian artists, such as the installation Memória Episodika by plastic artist Edmond Oliveira, based on the life experience of his father, one of the first emigrants to arrive in Luxembourg; or Paulo Lobo’s photographs, which reflect the impact of the Portuguese presence on the Luxembourg landscape.

The design is by the duo Sara and Pedro Gonçalves and the museography by Luísa Pacheco Marques. The opening of the exhibition in Portugal was possible thanks to the support of the Municipality of Cascais, the Municipality of Almeida, the Ministry of Foreign and European Affairs of Luxembourg, the Ministry of Culture of Luxembourg, the National Audiovisual Center and the Luxembourg companies POST, WEALINS et LOSCH Digital Lab.